… water shortage has been a major threat, responsible for destroying civilisations

Water, after air, is the most immediately essential resource for life. It is not substitutable for agriculture and drinking, although there is scope for more efficient use. Historically, water shortage has been a major threat, responsible for destroying ancient civilisations from southern India to South America, and from the Middle East to China. Some put huge resources into securing water supplies, yet environmental conditions (lack of water, increased salination) changed faster than they could adapt, if they could adapt at all. 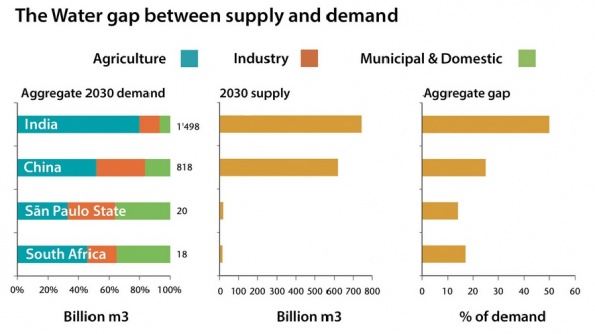 The Water Gap between supply and Demand for four case examples Base-case demand, supply, and gaps for the regional case studies of the 2030 Water Resources Group study. Source: 2030 WRG (2009).

Here, as an illustration, we consider the nature of the challenge for two countries, India and China (although other parts of the world, such as Sãn Paulo, also face major challenges, as the graph indicates).

India is hugely dependent on groundwater for agriculture, yet overall demand far outstrips projected renewal and supply. By 2030 — 16 years time — there is a projected 50% gap between supply and demand. If unaddressed, this would totally change the projected increase in India’s middle class. But that is almost a trite observation given the scale of the problem: India’s demand for food is far beyond what global markets could supply in the event of major, structurally embedded, failure in water supply. There are potential remedial measures, ranging from simple on-farm measures (tree and orchard plantations, ditches ponds and other water interceptions) to more elaborate on farm measures (trickle irrigation) to major infrastructural projects and better management of wasteful water use. But the urgency of the situation is not necessarily appreciated (2030 WRG, 2009).

China, with a 25% shortfall projected by 2030, is diverting major flows from South to North

China also faces a major challenge, with 2030 WRG predicting a shortfall in supply of 25% by 2030. In addition to outright shortages, China also faces problems with degraded water quality. The impact of climate change on water resources and agriculture in China has been comprehensively reviewed (e.g. Piao et al. 2010). Historically drought and chronic water shortage has been a major recurring problem. The current response emphasises physical infrastructure, with the worlds largest ever infrastructural project, the South-to-North Water Diversion first proposed by Mao in the 1950s and now well underway. Even so, it will struggling to keep up with demand, although there is scope for more efficient water use. This is already rated a major issue for Chinese policymakers; whether the policy response will match the challenge remains to be seen. China needs to hope for the best but plan for the worst.

Evidently, if these projections are correct, and they are not resolved, China and India’s projected increase in wealth and middle-class consumption, is unlikely to follow the projections featured in the NIC (2012) report.

Water availability is clearly a global trend to bend.